Very excited to announce this year mentors for the workshop Reality Capture. As recognized mentors of last year BILT Academy Summit 2018, they are back again and committed to present and teach students in scan to BIM workflows.

Conor is a veteran BILT Europe speaker, Edinburgh to be his fourth appearance. As part of the panel discussion on standards in Delft 2013, he spoke about BIM implementation for small companies. In Aarhus, he presented work on scan-to-BIM applied to historic buildings and was rated a top 10 speaker. This was followed up in Ljubljana with some further work into the world of reality capture and BIM. This year he’ll be taking a different track and running a roundtable discussion, digesting the UNFCCC global climate talks and their effect on our industry. Trained as a construction engineer, in 2016 he received his M.Sc in Construction and Real Estate Management from the HTW Berlin. He established Shaw Architectural Solutions in 2014 which offers BIM consultancy services worldwide with clients include Engineers in Berlin, Surveyors in Belfast, Contractors in New York and Architects and private clients in Helsinki. Recently Conor has been involved in establishing a network of professionals with a shared vision of promoting ecological building practices and is currently in the middle of building a 185m2 guesthouse in Finland from wood, straw and clay.

The BILT Academy mentorship programme is a very positive development of what the BILT conference is about. I have been involved previously with the European Architecture Student’s Assembly, a similar non-profit organisation, and am well aware of the benefits such experiences give to a student in the construction field. The unforeseen outcomes of involvement with an event like this such as; contacts made, experiences gained and personal truths challenged, can be greatly beneficial. In my own experience, it was the ‘extra curriculars’ in which I was involved (and not necessarily university attendance), which, in hind-sight, has had the greatest impact on my professional development. Therefore I see such a program as a very positive undertaking and am delighted to be involved again in Edinburgh!

I am passionate about process and technology innovation and how they can change industries and people’s lives. My education is in architectural design and documentation, but my experience within the AEC space is far more varied.

I have implemented various practice technologies into design, estimating, and construction teams and workflows; worked on amazing projects such as the SaRang Global Ministry center in Seoul as a designer, and Renzo Piano’s addition to the Louis Kahn Kimbell Art Museum as a contractor; and have had the privilege of growing and leading one of the most talented VDC & Process Innovation teams in the industry.

Those experiences have taught me there is a better way to create our built environment, and I want to make that way become a reality. As a first step in that journey, I have joined ClearEdge3D to help them develop the tools necessary for design and construction firms to get the most out of reality capture within the AEC industry, with the goal of closing the gap between the virtual and real world.

Our education system so often holds up individuals as heroes of design or industry. Piano, Gehry, Calatrava, Gates, Musk, etc… In reality, the changes these people are credited with took hundreds or even thousands of people working towards a similar vision. And a lot of the effort wasn’t people working for those luminaries, it was people in adjacent companies or even industries that made their own impacts that made it easier for those luminaries to succeed. It was all the people on similar paths that lent legitimacy to their efforts. The individuals we hear about are those with the best timing, the most successful, the most well-known, but they are not the titular super-hero entrepreneur that single-handedly changed the world…

That is why programs like this are so important. If you want to change a profession, or an industry, you need to start a revolution. Revolutions happen on the backs of thousands of small but important decisions, and most often happen when new people enter a profession with a passion for how that profession should be. So, by empowering new architects, engineers, builders, and fabricators with the knowledge and the tools to enact the changes our industry needs – each of us can have an outsized impact on pushing change forward. And while none of us may be that person that becomes famous for re-inventing how buildings are made, at least we’ll have played a critical part in making it possible.

Reality capture: various tools rapidly becoming standard in the AEC industry, and Scan-to-BIM: an emerging technology which bridges one of the most challenging gaps in the industry. The mentors will digest the state-of-the-art for you by putting current trends and technologies into easy to understand terms. Past experience and example projects will be used to convey this KLO.

In this lab, we will be getting our hands dirty with various pieces of software such as Autodesk ReCap and Edgewise 3D. We will work on a recently scanned project and participants will get simple instructions from the experts on how to best utilize the strengths of scan-to-BIM software.

03-Become familiar with benefits and the limitations of such software.

Semi-automated scan-to-BIM software is unquestionably the epitome of bleeding-edge technology, and thus, limitations to the capabilities persist. We will explain what these are and how best to select tools and commands to get the best results from the software.

A successful day and again a small step further to a room optimization workflow.

1 Defining the lists as Input

Actually very easy if you see it like this .. but yet took me a few days to figure it out 🙂 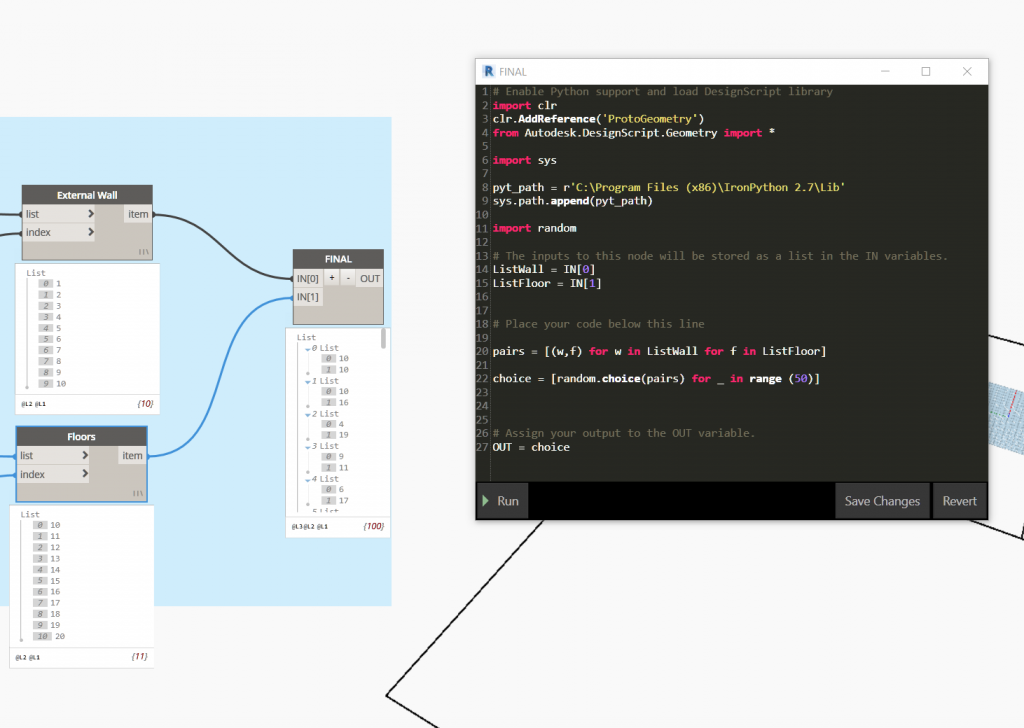